3D printing really does save the lives of creatures whose injuries or deformities make it difficult or impossible for them to survive on their own. Some of the best examples of this are the stories about birds. A bird needs a beak to be able to eat, defend itself, and otherwise survive, so beak injuries can often mean a rather dismal future. Several birds have been the lucky recipients of 3D printed beaks, including a couple of toucans, a pelican, and others. These birds, after devastating injuries, were restored to full functionality by 3D printed beaks designed by some very caring people.

These birds have been fitted with beak prosthetics made from durable resin materials, but recently a macaw became the recipient of the world’s first 3D printed titanium beak. Gigi the macaw, who was rescued from captivity in Brazil, had a seriously deformed beak that prevented her from eating on her own. Her plight was brought to the attention of a group of veterinary experts from the Animal Care Center Ipiranga in São Paulo. No strangers to 3D printing, the team, consisting of veterinary surgeon Roberto Fecchio, 3D designer and facial reconstruction specialist Cicero Moraes, and veterinary dentist Paul Miamoto, was responsible for 3D printing a new shell for Fred the tortoise last year, as well as a beak for one of the aforementioned toucans.

Gigi, they realized, wouldn’t benefit very much from a plastic beak. Macaw beaks are tough, hard and hooked, as the birds need to be able to crack and smash their food. Many human prosthetics are made from titanium, so why not try the material on a bird? Titanium is lightweight, strong, and rust-resistant, which makes it an ideal material for medical devices and implants – and, as it turns out, for prosthetic beaks. The veterinary team took a series of photographs of Gigi and used them to create a 3D model of a beak, which was then 3D printed in titanium by specialists at the Renato Archer Technology and Information Center (CTI).

The beak was then surgically attached to Gigi’s naturally stunted beak on February 18, and she is now recovering wonderfully, according to the Center for Research and Screening of Wild Animals (CEPTAS) at Unimonte University. Only days after her surgery, she can eat solid food on her own. She also looks fabulous. Her new beak was attached with brightly colored screws, so it appears at first glance to be studded with rhinestones. A bejeweled silver beak – all the other birds are going to be seriously jealous.

Since Gigi spent most of her life in captivity, she will not be able to survive on her own, so her caretakers are hoping she can be adopted by a zoo. CEPTAS is also using Gigi’s story to bring attention to birds who are victims of illegal exotic animal trafficking. 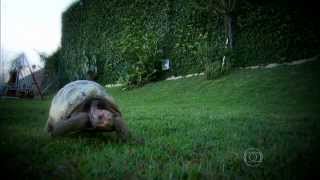